It's been awhile since I wrote about the Membership Advisory Committee (MAC) for which I am proud to be part of this year.  The last update was in May and was the first official North Central Region Update. The original post from February:  What is the MAC? A "SHRM" Term has risen to the most popular post on my blog site.  So thank you to those who felt it was a worthy read.  Having just returned from the annual SHRM conference in Chicago, I felt I owed my region (the North Central Region aka NCR) an update, especially since so many of you took time to fill out the survey sent out in the Spring. 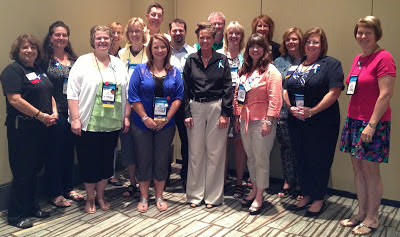 However, before I get into the results, I would just like to say that the hashtag I started a few years ago: #NorthCentralRegionRocks is one of the most accurate descriptors for the leaders in our region among any in the #SHRMLead stream, in my humble opinion, of course.  As I recall, the Ohio, Minnesota, and North Dakota state directors get my vote for "most enduring" as they literally danced for three hours straight at the SHRM TweetUp at the House of Blues.  Two of them in 80s costume as well which I know the white wig must have been HOT to wear for that long.  You definitely have a "healthy" leadership team representing you!

Now for the results:  Overall, the NCR was not much different from what I heard the other MAC reps sharing about their region results which we will be sharing a combined report later on.  We do have some unique things going on in our region whereas at least one of our states is not experiencing the same unemployment rates as a majority of the others in our region and in the nation for that matter.  While the majority of survey responses came from volunteers, some did not due to my publicizing a link via social media.  Therefore, I had some responses that was from general members and/or non members.  It was difficult to determine if there were any differences in opinion between volunteers and members who were not in a volunteer capacity either at the chapter, state, national level.  Many of you who are volunteers know that our region actually ended up with two separate surveys both asking essentially the same thing because I had done my own survey using the questions posted in the original February update which followed by a survey SHRM assisted all of the regions in conducting.  The major difference is there were choices to select from in the second survey where the first one was open ended questions.  So combined we had over 150 responses and it is difficult to determine if some of the responders answered both surveys or not.  Regardless, I have reviewed the contents of both and the following is a list of the most popular findings:

Q1 SHRM has numerous initiatives in development for HR professionals, ranging from a competencies model, and new business-related seminars, to the development of HR standards, and the promotion of workforce flexibility. What new things should SHRM be working on to better serve the HR profession?

Q2 SHRM is leading efforts to address the nation's skills gap, and we are piloting a new survey to help you identify the specific gaps in your immediate geographical area. What do HR professionals in your area need to help them address skills gaps and talent shortages? NOTE: Not all of our states indicating having a skills gap.

We will be talking again in November at the annual SHRM Leadership conference to all three boards of directors (SHRM, SHRM Foundation, and HRCI).  Please keep the lines of communication open and let me know your thoughts on any topic (positive or negative).  You can find me on twitter, LinkedIn, or respond to this blog post.  I am open an available and would love to hear from you!

Posted by RogersHRConsult at 10:44 AM No comments: