Will I See You at ILSHRM13?

I sure hope to see you at ILSHRM13 and hear about your SHRM related membership and volunteer experiences!

The first half of the year has been extremely successful for the Membership Advisory Committee (MAC) for which I am one of five members. Illinois is one of ten states I represent in the North Central Region.  I would like to take this opportunity to thank those of you in Illinois for participating in the Spring MAC survey that assisted us in our meetings with the SHRM, SHRM Foundation, and HRCI boards just prior to the annual conference in Chicago in June.  The following are links to all of the MAC related communications I have produced so far this year.

1st Offical SHRM NCR MAC Update
http://donnarogershr.blogspot.com/2013/05/2013-1st-official-shrm-mac-update.html included in this post is a recorded screen cast (power point presentation) that you can watch to get more details beyond the written blog post. The following is the direct link to the screencast:
https://uiscamtasiar.uis.edu/relaycontent/MACUpdateNCRSHRM_-_Flash_%28Large%29_-_20130429_05.38.39PM.html

What is the MAC? A SHRM term.
http://donnarogershr.blogspot.com/2013/02/what-is-mac-shrm-term.html

Please feel free to share this information with other HR professionals and keep me in mind if you have any comments or suggestions for SHRM.  I am always happy to pass the information along.  I hope to see you at the upcoming annual Illinois State Council of SHRM conference in Oakbrook.  The speaker line up is awesome!
Posted by RogersHRConsult at 2:02 PM 1 comment:

MAC Meetings with "the Boards" Feedback

First of all, thanks to all those who participated in the Spring 2013 MAC Survey and to all the SHRM State Council Directors in the North Central Region for electing me to serve you. The input we received was so valuable and made our jobs easier as representatives of our volunteer leaders and the members in the states we serve.

The MAC Representatives met for an hour each with the HRCI Board, SHRM Foundation Board and SHRM's Board of Directors prior to the SHRM Annual Conference.  The MAC Reps expected to spend about 20 minutes with each board; however, they were so engaged and interested in the information that we had to share on behalf of the members that we were given additional time. Since our approach for collecting data was via survey, we were able to provide actual data and statistics to back up the information that we covered. Our methodology paid off, as the information we discussed was fact based and gave it credibility in the eyes of the board members.

The MAC Survey had 5 Areas of Focus:

Our members fully understand SHRM's global strategy; however, they feel that this strategy and membership growth have resulted in SHRM losing sight of supporting the professional.  SHRM's Board took note of this discussion and was appreciative for the feedback.

Obtaining Feedback for the SHRM Board and its Leadership Team

Members truly resonated with the previous strategy of “Advancing the Profession”, which told a compelling story. They are looking to SHRM to continue to raise awareness of the value of HR and certification.  We were pleased to hear Hank Jackson bring language about Advancing the Profession (ATP) in his remarks during the SHRM Annual Conference the day after we met.  You should also know that Bette Francis is passionate about professional development.

We shared with the board that communication needed to be a strategy and that improved communication is needed particularly when new strategies are being implemented.

We also discussed the membership's feedback on the high cost of the Annual Conference, recertification programs, and local and national membership dues. This was the number 1 rated feedback received in our survey.

Overall, those that completed the survey, 95% are pleased and proud of what the SHRM foundation provides to the members in the form of grants, scholarships, and research.

Symbiotic relation that the average member doesn't understand what the SHRM foundation does. There needs to be better communication from the foundation and the flow downward.

We shared with HRCI, some of the challenges chapters and state councils are having in obtaining certification credits for programs, as well as the difficulty with entering recertification credits. You will be pleased to hear that HRCI is in the process of implementing a new web site.

The survey simply reinforced there is an ongoing problem with skills needed for most jobs in various industries.  This is an area SHRM has been working on and will continue to work with different partners to provide resources for HR Professionals.  The Board was interested in hearing developing stories such as “work centers” creating a stir with NLRB (#Fightfor15 & OurWalmart where among several examples) shared by the MAC Reps.

We shared with the Board top resources for SHRM to Serve the HR Professional of which the following were ranked as a result of the survey:

#1 Join for Professional Development- Professional Society
#2 Employment Law Resources- Immigration, caveat on how to apply, not just what law says
#3 Comp & Benefits- PPACA, ADAAA, FMLA
#4 Employee Relations- what to do

Other concerns for members were Talent Retention/Employee Engagement as economy improves.

Also members continue to look to SHRM to expand technology resources.
Finally, members don't want SHRM to reinvent the wheel, just embrace it. SHRM doesn’t have to be everything to everyone. What we do, should be done great! Continue to engage in strategic partnerships to achieve goals.

Lastly, the MAC Reps are waiting for our next focus areas and that we will once again be conducting a survey. You will be happy to know that the SHRM Foundation has agreed to help us generate our next survey and that we are looking to expand our survey to reach out to the At-Large Members.

Overall, this was a positive exchange as well as a positive experience and we are hoping the information we shared with all three boards along with recommendations made by the MAC Reps will have a successful outcome for all.


Illinois SHRM Immediate Past State Director
Posted by RogersHRConsult at 11:53 AM No comments:

Independence Keepers - It's All In The Family

As we approach our countries annual celebration of "Independence Day" (the 4th of July), I would like to give a "shout out" to my father, Donald Eugene Rogers Sr., who has dedicated his life to the freedom of this America and continues to support the troops who fight for this great country of ours.  He supports the troops, so much so that he formed his own "troop", if you will, as a father of three children who all served this country and proudly followed in his footsteps. 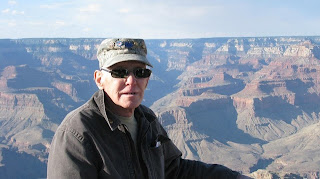 Today, it brought tears to my eyes as I opened an unexpected card from him thanking me and my son for taking him to see the grand canyon which is something he had always wanted to see but never had the opportunity.  He not only had never had the opportunity to see one of the worlds greatest wonders but up until that point, from June 4-10, 2013, he had never really been able to go on a real vacation.  The reason is because he always gave his vacations over the years to his country serving his annual two weeks on active duty.  It was an honor and privilege to take him to Arizona to see his brother, nieces and nephews that he had not seen in decades (since they drove to see us).  I will always cherish the time we shared as will my son Adam. 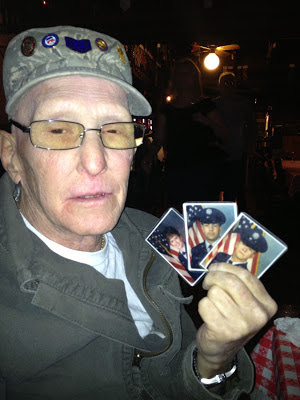 While visiting the family, he pulled out his pictures to share and while the photos are rather aged, he is most proud of these pictures because they show everyone how all three of his kids served the country.  The photos are all laminated.  As one of those kids, I can't help but feel honored that your father is proud of you even if that accomplishment is not necessarily one that I am personally most proud of in my life.  The fact that he is proud and he takes those photos with him everywhere he goes and most likely shows anyone he can is touching to say the least.

I took the photo to the left here before he put them all back very neatly in his wallet with the intent to eventually write this blog to honor him.  He doesn't realize how much he is honoring us each time he pulls them out.  The photos he is holding from left to right are in order of age and when we went into the service.  I was the oldest and the first to join the Illinois Air National Guard serving 6 years.  My brother Donald Eugene Rogers, Jr. served not quite as long as my dad but definitely long enough to earn a retirement from the Air Force as an active duty safety specialist just last March.  He has moved to Nashville, TN and now works for a private employer.  My youngest brother Ernest Nelson Rogers served four years active duty on the flight lines at Shaw AFB, SC.  He lives in Rembert, SC now with his two boys and occasionally has an opportunity to appear in big screen movies such as, my favorite, Dear John.  While we all don't see each other much we still keep in touch and most often to check up on the status of my fathers condition. 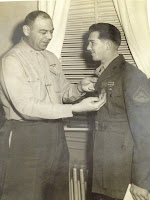 You see, my father, is a four and a half year cancer survivor who against all odds has been able to stay alive primarily because of his almost three decades of military service.  Upon his honorable discharge (which all of us have earned by the way) he retired with full TriCare coverage.  Without that he would not be able to pay for the nearly $6,000 a month in meds (one of which is a chemo pill) that is keeping him going.  Sure he had his moments of not knowing when the good lord was going to take him (and still doesn't) to include days of intravenous chemotherapy, radiation, blood transfusions, etc.  However, after being initially diagnosed with lung cancer in February of 2009 and then brain cancer in February of 2011, we are all so grateful he is still here.

This final picture is one that his niece shared with us on our trip to Arizona of dad being honored with a medal in the Marines.  After his active duty service he later joined the Illinois Air National Guard retiring as a Technical Sergeant.  When I joined I had to work with my dad on the same base  and as the safety inspector once had to ask him to put his seatbelt on.  He also made sure the young airmen kept their distance.  The most memorable moment during our service together was the drive to summer camp in Biloxi, MS where I had to spend the night in the car to save hotel costs.  I don't remember sleeping much that night as I was a bit scared of who might come knocking on the window.  All in all, I was and still am, as are my brothers, proud to carry on the torch of honoring independence.

So thank you dad for your effort in maintaining our country's independence and your willingness to not give up on a good fight (including that damn cancer fight you're currently in)!  You make us proud to be your children! We love you forever and ever!

Happy 4th of July to all and thank you to a service member who is or has ever served America!

Posted by RogersHRConsult at 7:11 PM No comments: