So the last months have been upheaval in our profession due to the SHRM/HRCI separation. The only other times I remember the HR community being this "moved" is when the SHRM Members for Transparency concerns where made public and the "I Hate HR" article was published. I know the later dates me a but but I have been passionate and incredibly supportive of the "Profession" society I have been a very active advocate for most of my business career. 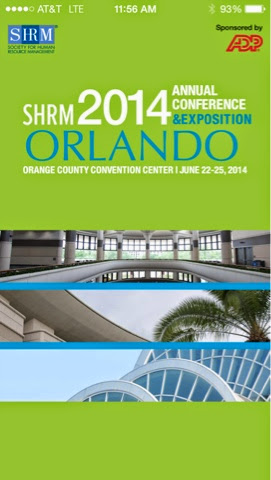 As expected, over the last few days at #SHRM14, I have heard comments both positive and negative about both SHRM and HRCI. However, I consider myself to be a reasonable person and I don't take everyone's comments to heart. Nor do I believe everything I hear.  But (and not my first BUT) what I can't get over is the absence and uneasy feeling that has been so obviously present during this conference.
That absence is everything HRCI- PHR/SPHR/GPHR and so on.  HRCI,  who by the way, has been an organization that has supported our profession since it's inception and still does!  Yeah maybe our current testing and certification process needed an upgrade. BUT (and I do mean a BIG BUT) do we have to make an obvious disagreement at the highest levels of the organization so very blatant especially to the average SHRM member and non members? Do we have to portray a perception of being the BIGGER Kid on the block (the Bully) who will do whatever they want to get their way? Do we have be so careful and purposely talk as if the current certification is irrelevant and unimportant? Do we have to "bully" the little guy? Isn't bullying an issues we deal with in the workplace? Are we not better than that? Are we not professional business people? Are we not suppose to set the example for the workplace? Seriously, I am ashamed of the organization I have supported, cheered for, promoted, and grown fond of over the years to the point that I feel SHRM is a part of who I am. They are why I am who I am. I now don't feel comfortable with my own thoughts and feelings:
When the HRCI board is not in the front seats of this conference along side the SHRM and SHRM Foundation boards who's members all work so very hard to advance our profession.
When you walk into the SHRM Store and see zero PHR, SPHR, and GPHR imprinted items that we are all so use to seeing all these years.
When you have to go offsite to participate in HRCI events.
When HRCI is not even mentioned when discussing the new certification (referred to as the other or present certification).
When the obvious feeling of absence of a key player is so distinctly obvious all over the conference almost as if HRCI is a curse word.
Honesty, I am very very disappointed with the actions of SHRM. The absence of anything related to my certification does not make my heart grow fonder for the organization I have loved for so long!
SHRM you expected us to get certified in the new competency model. Sections of which are new to the old model. Sections for which I and many others don't feel you are portraying. Seriously, if you expect professionalism of your members, why don't you walk the talk?
Posted by RogersHRConsult at 10:15 AM 4 comments:

As you read in my most recent posts, SHRM has announced new certifications that will be available in 2015.  Several have referred to the fiasco with the announcement and relationship with HRCI as a DIVORCE.  While that may or may not be true as the two organizations proceed, SHRM has announced the name of what I have referred to above as their new Baby.  They are the SHRM-CP (Society for Human Resources Management - Certified Professional) and SHRM-SCP (Society for Human Resources Management - SENIOR Certified Professional).  Here is what the logo's will look like: 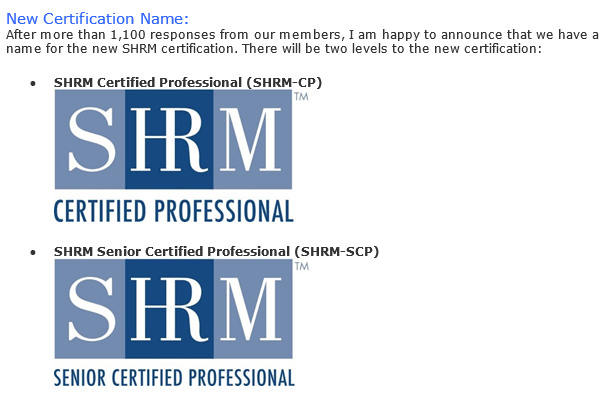 Of course, as a career long volunteer for SHRM, I don't mean that in a condescending way.  However, it should be treated as such due to the delicate situation that has been created between the two organizations and primarily within the community who is very concerned about the impression this makes on the non-HR community.  I know the latter, is by far my biggest concern as I have worked so hard over the years to advance this profession and serve the professional.  I do realize the latter is in the plan from SHRM to allow current professionals to obtain the new certifications very easily once they are available. So from what I understand when I go through the certification steps mentioned in a previous blog post, my name will appear as the following in all my professional signatures:

Wow, that’s a lot of letters.  I'm glad I don't have to introduce myself as such.  Just kidding.  In addition, to the name, SHRM has also announced how this certification process will be governed. 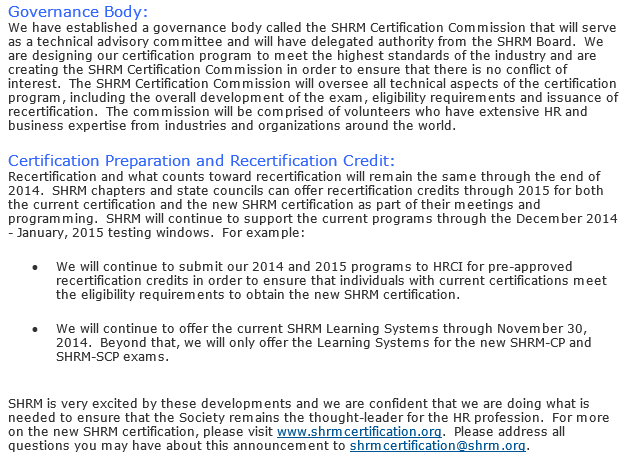 As you can see above, SHRM has also decided how the credits will be handled via SHRM affiliates.  What I don't have an answer to yet is, how they will handle pre-approved providers like my company, Rogers HR Consulting, who has been a provider of PHR/SPHR HRCI certified programs since 2007.  I have sent my question to the email about and waiting to hear back.  I am sure a lot of organizations like myself as well as associations, universities, etc. are very curious.

Having just completed my year as a Membership Advisory Committee (MAC) for SHRM in December, I was considering applying to serve on the HRCI board.  Now it seems I will need to make a choice as whether I apply to SHRM's new governance board or the stick with my original plan.  Both will have an impact on the certification/educational needs of the professionals I have been serving as a volunteer for SHRM affiliates since 1997.  Of course, neither of them may elect me, if I applied so it could be a non-issue.  End of my SHRM volunteer career? Who knows? I am still on the ILSHRM board as College Relations Director and I am one of the co-advisors for the UIS Student Chapter aka PStarHR so it's not likely.

If your are going to #SHRM14 be sure to stop by one of the three offered SHRM Certification Town Hall meetings hosted by my friend Brian Dickson and his team.  I am sure they will answer all your questions.  Remember, HRCI is not going away!  Connect with me on LinkedIn and Twitter and give me a shout out to meet in real life (IRL) at the conference if you plan to be there.
Posted by RogersHRConsult at 7:06 PM 1 comment: