State of Union Membership in Illinois 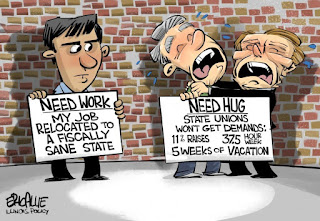 This morning, I was interviewed by WTAX talk radio about the title above.  This coming the morning after Governor Bruce Rauner’s AFSCME arbitration veto failed in the Illinois House and as we approach the Labor Day weekend which was initially started by a union. This was a victory for the governor.  The requests of the governor is not unlike the majority of employers in the US.  He simply want’s a pay freeze and wants workers to pay more for health insurance.  The state is in a budget crises for god’s sake, why you would want to freeze wages until it can get resolved.  We have people leaving this state left and right due to the high costs to live and operate a business in Illinois.  Obamacare has increases health care costs all over the US.  Every single employer who falls under the requirements of the new law to be imposed next year are seriously considering how they are going to survive.  AFSME wants an 11.5% wage increase which I have never heard of during my entire professional career in any private employer.  The average increase has been 2-3% for over a decade and the highest I recall is in the late 90s when it was 4-5%.  What are they thinking?

Illinois does not have a right to work statute because they are an agency shop employer which means employees who are hired by unionized shops are forced to join the union. In other words the union can get an employee fired for not paying union dues in this state. Some of our neighboring states are Right to Work states which gives employees the right to choose whether or not they want to be a union member.  In the beginning unions were important but due to increased legislation since the 60s there is less of a need for them.  Competition is fierce and benefits are now required to be offered if you work more than 30 hours a week depending on the size of the organization.  Employers are already doing everything the unions were originally put in place to do.  I am not saying they are not needed at all as there are still some bull headed employers that can’t get themselves in the program of following the laws but I would say the majority want to be in compliance even if they don’t know all the rules in the playbook.  That’s why they seek help from consultants like me to help get them in line.  Why have a third party involved in employee/employer negotiations if you don’t need them. 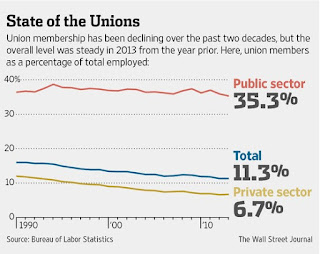 
“One in 10 workers in the private, for profit sector are union members in Illinois – One in 12 in the nonprofit sector.  But more than HALF of ILLINOIS GOVERNMENT WORKERS BELONG TO A UNION”.

When they are getting double digit increases, work 2.5 hours less a week that they typical 40 hour a week worker and can earn as much as five weeks of vacation that can be very costly for the taxpayers throughout the state.  No wonder Illinois is in a budget crisis.