Is the Good Ole' Boy Network a Myth or Reality?

The following was originally written in 2011 and posted on the Women of HR site here: http://womenofhr.com/is-the-good-ol%E2%80%99-boy-network-just-a-myth/

As I prepare for a program on harassment and discrimination to be delivered at the Danville Community College later this month, I was reminded of this post and thought I would share again here. From the archives:

From Women of HR 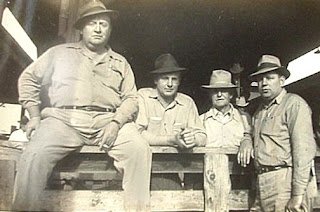 By Donna Rogers, SPHR, SHRM-SCP
The following are a few hypothetical (not really) life stories related to human resources, being a woman in what is still in some circles ‘a man’s world’ and organizational behavior.

At the end of each story, I challenge you to put yourself in the position of anyone in this story and comment on whether or not you think the “good ol’ boy” network is a myth or has a touch of reality. There are no right or wrong answers. Have fun!

In the building, friendships are strong, male dominated communications with a tint of sexual harassment are common place, and a layoff of the co-pilots is pending due to the base switching to more modern solo piloted aircraft. The position is filled with a male co-pilot who would have lost his job had this position not been available due to the aircraft switch.

A fully qualified female civilian employee has an idea to promote HR related services to members of the organization that will improve efficiency and effectiveness of their operations while generating revenue for her own department. She has the support of her boss and together they pitch the idea to the company attorney to minimize organizational risk and ask for professional advice.

The attorney has been long time college buddies with the CEO and other members of the organization including those on the board of directors. This attorney also has the qualifications to offer the same services for a fee from his company. The idea is not approved by the CEO but later shows up as a service outreach of the company who employees the attorney.

The winning contract has had many past dealings with the decision makers as well as those around closest to him and in other positions across the state. Come to find out there were several other big players in the bidding process that were much larger and had connections both within that organization as well as within the larger organization.
Posted by RogersHRConsult at 8:00 AM No comments:

Engaged Bride to Be = Discouraged Employee

The following was originally written in 2011 and posted on the Women of HR site here: http://womenofhr.com/bride-to-be-discouraged-employee/

As I prepare for a program on harassment and discrimination to be delivered at the Danville Community College later this month, I was reminded of this post and thought I would share again here.  From the archives (although updated slightly with number of years married, etc.

Last week (in 2011), I was teaching a two-day Certified Public Manager session for a group of association members.  The session was called Human Resources: Productivity and Quality.  During one of our discussions regarding compliance related issues we covered the process of an HR Audit which included as one of many tasks, a review of posters that need to be posted at work sites.  One participant mentioned a poster that drew quite a stir when it first came out, which I personally was not aware of, pictured to the left here.  I asked her to send it to me and we later got into a discussion that this situation reminded me of during my early working years before my HR career.

At 23 years old, just after graduating from ISU with my undergrad in public relations, I obtained my first marketing director position officially after having been doing the job during my internship when two of our marketing directors moved on (all during one semester).  Of course at that age, I was all gung ho about moving up the ladder in the mall management business.  So I worked very hard for another two years and was pleasantly surprised with the prospect of promotion.  Life was really going well because my boyfriend of 5 years (now my husband of 27 years) had just proposed and I accepted.  Unfortunately, life took an unexpected turn for the worse when I went to work to share the news with the office.

Much to my surprise my boss (a female mall manager) suggested that I do not share the news with anyone else in the office and especially not her boss, the regional mall manager.  Still a bit naive of the ways of work for women, I asked why.  She proceeded to tell me that she thought it would hurt my chances of a promotion within the industry because Marketing Directors were expected to travel around the country moving from small to larger malls.  The idea of a female Marketing Director being married and possibly planning a family would not go well.  So I basically had to hide my engagement (and put the ring in a drawer when I went to work) for six months.  I was then promoted to a mall two levels above normal.  There were four levels of malls based on square footage and sales.  As a new Marketing Director, I would have been expected to start at a level one mall first.

However, the promotion offer was for a level two mall.  I turned it down because that was not the company I wished to work for any longer.  The point is I had no idea I was being discriminated against (at least not from the same lens I look at the situation now).  The bottom line is harassment& discrimination comes in all shapes & sizes.  Be aware and try not to get discouraged.  Engagement is a time to celebrate!
Posted by RogersHRConsult at 6:47 PM No comments: